Eternal Card Game Wiki
Register
Don't have an account?
Sign In
Advertisement
in: Into Shadow, Legendary, Scion,
and 8 more

Lifesteal
Nothing can have Aegis.
Summon: The enemy player must choose: Sacrifice a unit or give Vara +2/+2 and Deadly.

This page is about one card for the character Vara. For other uses, see Vara (disambiguation).

Beat the relevant mission in Into Shadow.

Vara, Vengeance-Seeker serves both as a powerful stand-alone unit, and a strong silver bullet against AegisAegis:
Protected from one enemy spell or effect (but not from battle damage).
.

By itself, the card is well statted, being a 3/4 with LifestealLifesteal:
When this deals damage, you gain that much

.
for 4 power. Its strongest features are however in its effects, the first one being a powerful aura, the second a disrupting choose-one effect forced upon the opponent.

For how much it regards its aura, the moment the card is played every current Aegis is dispelled. At the same time, cards with Aegis will lose the battle skill the moment they're played, while also being impossible to gain Aegis both for the players and for the units. In the case Vara, Vengeance-Seeker is killed, the dispelled Aegis will not come back, as if already triggered. Since this is an ongoing effect, it makes cards like Permafrost

less effective as an answer to it.

Regarding its SummonSummon:
Does something when played., either the opponent sacrifices a unit, either she turns into a Sandstorm Titan

counterpart, except that it doesn't stop FlyingFlying:
Can only be blocked by other units with flying. and has both DeadlyDeadly:
Kills any unit it damages. and Lifesteal instead of EnduranceEndurance:
Readies at the end of your turn, can't be stunned, and can't be exhausted except to pay costs.. Differently from most other choose-one effects like Voprex, the Great Ruin 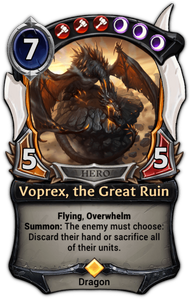 , the latter choice will be automatically activated in case the opponent has no unit on board. Lastly, remember that the stats increase and Deadly are permanent, which makes both drawing and playing her from the VoidError, the 'void' keyword is not in the database. Check spelling. good choices. Because of this, it makes simply killing or silencing it a detrimental choice: if simply killed, its Summon is still available, which makes playing it again put the opponent in the same situation as before; if simply silenced, either it got the stat increase (becoming a 5/6) or it didn't, but the latter means a unit was sacrificed neverthless.

Overall, the main feature the card offers is a good body with a powerful effect and a summon that will either kill a unit or give it an even better body. At the same time, however, the card has some letdowns. First of all, its effect makes it so that no Aegis can be on board, which means the player playing Vara, Vengeance-Seeker cannot rely on cards having or providing such battle skill. On the other side, its reliance on the opponent choosing the summon effect means that one can play around it depending on the cards available: sacrificing a unit makes Vara, Vengeance-Seeker vulnerable to cards like Suffocate 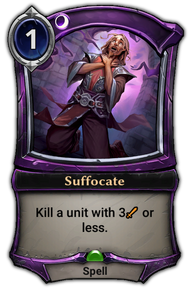 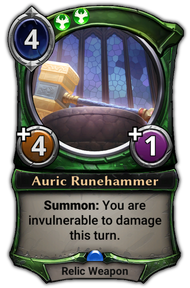 , while giving her better stats put her in range for a Vanquish 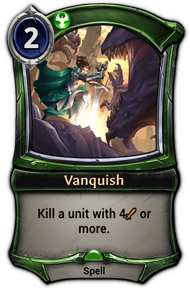 ; removing it with cards that both kill and SilenceSilence:
Remove all text from a card and its attachments. (like Feeding Time 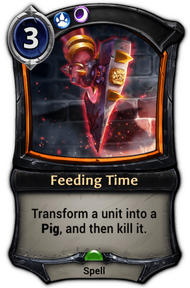 without sacrificing a unit doesn't make it a bad trade for the opponent.

In terms of deckbuilding, the card fits in decks that: 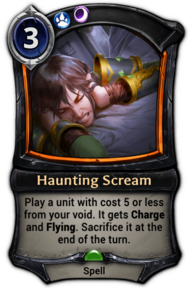 works with great synergy as well: it'll trigger both Vara, Vengeance-Seeker aura and Summon, while permanently giving it also Flying and ChargeCharge:
Can attack the turn it is played. (without considering that the Lifesteal will still give you immediate benefits from its short-lived appereance).

If Vara is targeted as she enters play as she is summoned by a fast spell that transforms, such as Tyrannize 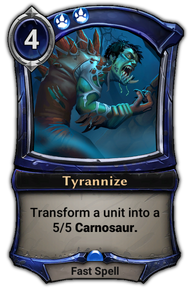 , the Dinosaur would get +2/+2 and Deadly if the second effect is chosen.

"Nothing can have Aegis", refers to both units and players. As Vara enters play any Aegis will be removed.

Units do not get their Aegis back after Vara leaves play. (Unless they leave play and come back, or are granted Aegis by another effect) 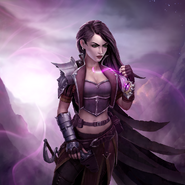