“No! I have done what is necessary to save Xulta. The blood I shed was the blood of heretics!”[1]

When you decimate your power, Verro goes Berserk.
Summon: Give one of your other Paladins Berserk.

Verro is the first promotional card of The Flame of Xulta, released a few weeks before the set's preview events, and is the second promo to be released before its set. The promo quest period lasted from September 18 to 24, 2019, and a Verro premium avatar was available in the store for a limited time.[1]

DecimateDecimate:
When you play this, you can choose to lose one Maximum Power to gain the effect.
was first revealed on Verro, without explanation of the The Flame of Xulta keyword's effect. Initially, the in-game tooltip teased: "Decimate: Some power comes at a dangerous price..."[2] The keyword was explained in a The Flame of Xulta mechanic reveal article two days later by DWD.[3] 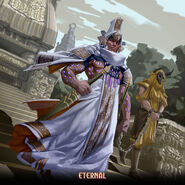 Retrieved from "https://eternalcardgame.fandom.com/wiki/Verro,_Banished_Inquisitor?oldid=37803"
Community content is available under CC-BY-SA unless otherwise noted.