Vishni's InfiltrateInfiltrate:
This does something the first time it hits the enemy player. effect stealsSteal:
Taking an enemy card is stealing. Stealing a card removes its influence requirements. the enemy void and places it into your void. Cards that prevent cards from leaving the enemy void (ie Adjudicator's Gavel 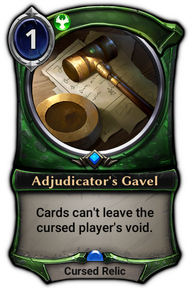 ) will prevent the Infiltrate effect. AegisAegis:
Protected from one enemy spell or effect (but not from battle damage). on the target's avatar would also prevent the cards from leaving the void.

As with many Infiltrate units, Vishni is a wonderful target for Haunting Scream 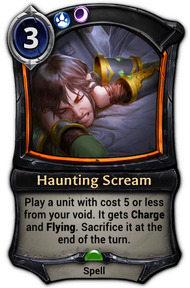 , which would grant ChargeCharge:
Can attack the turn it is played., and in the right situation, assist with landing the Infiltrate effect. Following this, additional copies of Haunting Scream could be played in later turns with new units you may have acquired in your void.

Vishni's infiltrate ability will be used up even if there are no cards in the enemy void.

Retrieved from "https://eternalcardgame.fandom.com/wiki/Vishni,_Lethrai_Highblood?oldid=33104"
Community content is available under CC-BY-SA unless otherwise noted.