Surge: The enemy player deals 1 damage to themselves.
Summon: Plunder.

The surge ability will be blocked by Face Aegis on the enemy player.

Damage the enemy player deals to themselves is affected by battle skills on their relic weapon, such as LifestealLifesteal:
When this deals damage, you gain that much

of units and relic weapons it damages.. Note that The Last Word 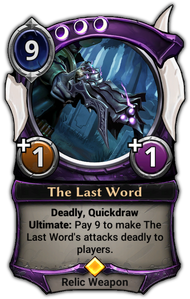 's UltimateUltimate:
Can only be used once. ability will not kill them, since it only affects attacks with the relic weapon, not all damage.

Retrieved from "https://eternalcardgame.fandom.com/wiki/Yeti_Taunt_Patrol?oldid=41671"
Community content is available under CC-BY-SA unless otherwise noted.